10 Corporate Comedy Chiefs: Inspiration To Add Humor To Your Brand Whether it’s a silly GIF, clever meme, or light-hearted jab at a competitor, when brands do humor right, everyone wins. In addition to sharing bite-sized news and conversations with fans, many creative companies are actively earning followers by adopting witty personas and sharing hilarious content every day on Twitter. Keep in mind that comedy is an art form, and that you will need to know your audience to make it succeed, but our guide featuring ten examples of hilarious corporate Twitter feeds illustrates how to be a clown in all the right ways:

The makers of the ultra-popular Doritos Locos Taco are also famous for their crafty jokes and teasing other companies on Twitter. All of Taco Bell’s 1.57 million Twitter followers are well aware that their online presence is packed with personality, charm, and “Fire Sauce.” Note that YUM Brands is also doing a great job with Pizza Hut’s and Kentucky Fried Chicken’s non-stop stream of funny gags, videos, and images too! If you thought that Old Spice’s commercials were strange (they are) then it should be no surprise to see that their Twitter feed is packed with off-the-wall gems of sage wisdom such as “It’s hard to take power naps when your gold-toed boots, Viking helmet, crocodile chaps and wrestling pajamas got lost in the move” that the brand is known for. Don’t you ever change, Old Spice. Keeping with the absurd themes of their ongoing marketing campaign, Skittles hands out non-sequiturs like a kid caught with a king-sized bag of candy at school. While asking followers for tips for out-dancing a wombat is a bit odd for a confectionary company, their brand of nonsense fits Skittles like an octopus sporting four pairs of rainbow-banded socks. America’s classic sandwich cookie updates regularly with fresh, sharp, and eye-catching content all centered around crafty ways to show off Oreos. Whether they post images of tiny model people basking on a crumbly Golden Oreo beach, or a cartoon demonstrating that it’s better to eat S’mores Oreos than trying to make them over an open flame in the office, Oreo constantly keeps it sweet and fun. At Electronic Entertainment Expo 2015 (or E3 for the uninitiated), Microsoft Game Studios showcased Rare’s upcoming game “Sea of Thieves” for the first time, all while getting ready to promote their 2016 launch, by giving Halloween decoration turned undead pirate “Captain Bones” control over the title’s Twitter feed. The smart mouthed skeleton is a hit with fans, as he slyly pokes fun at his co-workers and followers, while occasionally sharing hints about Sea of Thieves between complaining about the limited selection of grog at work. 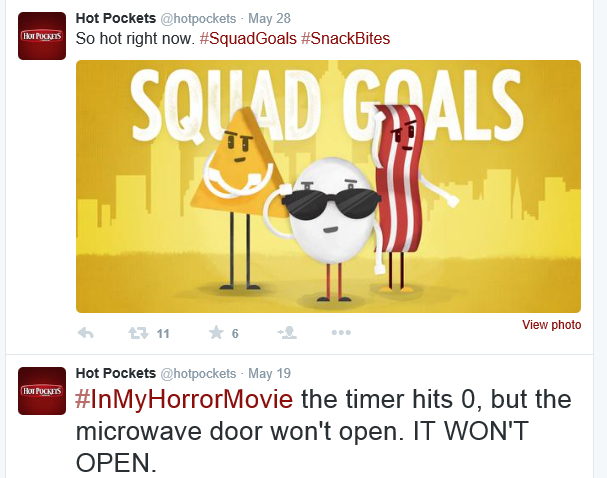 The Hot Pockets marketing crew certainly know their product’s place in the world as a “gamer food” staple, and they’ve embraced it with charmingly goofy videogame themed GIFs, videos and images. It doesn’t matter if you are a fan of their microwaved rectangles, it’s just plain old fun to watch their parody music videos and game trailers on Twitter. The marketing team at Arby’s seems to be having fun pondering why people “bake cookies and cook bacon”, and whether they’re making quips about curly fries, shakes or bacon sandwiches, their 450,000+ followers are clearly enjoying their culinary comedy. If we had to wrap up Denny’s Twitter humor in one word? Bonkers. The food-themed witticisms that Denny’s throws around are incredibly strange, yet creative, and that gives them bonus points in our book. Who can argue with Denny’s observation of “waffles have the cuuuuutest dimples”? Not to be outdone by Denny’s, the International House of Pancakes has a wacky way of using Twitter too. Between their dancing pancakes GIFs, and funny shout-outs to other breakfast staples, IHOP has its own distinctly sweet pancake-themed personality. Sold in at least one million** frozen flavors, Slurpee’s Twitter persona is lively, bubbly and is partial to tying other 7-Eleven products to their drinks. Slurpee shines at making visual gags that really stand out on your Twitter feed, and if that image of the bird-dog hybrid enjoying a Slurpee grabbed your attention while making you smile, mission accomplished!

It’s true that satire, joking, and pants-on-head absurdity isn’t for every brand’s Twitter presence, and you absolutely must understand your audience’s demographics to really pull it off, but if you can deliver a well-placed joke, not only will it be retweeted and shared with their friends, but it will help build a connection between your company and its dedicated fans. Remember to adapt humorous content to your Twitter feed only if it is a natural fit for your brand’s voice, always keep the fans in mind, and to have fun making us laugh!